This post is sponsored by Best Buy. All opinions of the Lion King Steelbook are my own.

It’s rare that you find a film that is loved by generations. Loved so much in fact, that the same company will get behind a remake that will speak to even more generations to come. My family and I were all about seeing the new version of The Lion King. Seeing it in 4K was even more spectacular, The Lion King Steelbook was a welcome addition to our movie collection.

For those of you who don’t know the story of Simba (Are there any of you… REALLY?!) here is a quick synopsis.

“A young lion returns from exile in adulthood, ready to reclaim the throne that was stolen from him and his father by his treacherous uncle.”

My daughter and I had such a good time watching it. We were singing and trying to catch what they left from the original Lion King and what new scenes they had in the remake. It was a really fun afternoon. I have to get my daughter to pencil me in to her busy schedule… She is 15-years-old and VERY busy!! (Wink, Wink).

The Lion King Collectible SteelBook is available today and only at Best Buy. When we get the Collectible Steelbooks, the artwork and incredible amount of extras (bonus materials, documentaries and deleted scenes) are something that make these really special.

You can save $5 on select Disney titles with the purchase of The Lion King.

Enter code LIONKING5 when you checkout online or at your local Best Buy.

This post is sponsored by Best Buy. All opinions and love of How to Train Your Dragon: The Hidden World is my own.

My daughter was quite young when my wife and I took her to see the very first How To Train Your Dragon film. She sat on the edge of her seat, bouncing up and down with excitement. She laughed uncontrollably and her eyes were wide during the flying sequences. Fast forward nine years later and the trilogy has been completed with the release of How to Train Your Dragon: The Hidden World.

How to Train Your Dragon: The Hidden World On 4K And Steelbook

My daughter is 14-years-old now, but she is super excited about the release of How to Train Your Dragon: The Hidden World. Even though she has gotten older, these movies are a big part of her childhood.

She is now an award winning artist (She is going to give me an earful if she ever reads this. She is very shy about her accomplishments) and is a HUGE fan of the beautiful animation in the final film of the trilogy.

For those of you who aren’t familiar with the story, her is a brief description of How to Train Your Dragon: The Hidden World.

What began as an unlikely friendship between an adolescent Viking and a fearsome Night Fury dragon has become an epic trilogy spanning their lives. In this chapter, Hiccup and Toothless will finally discover their true destinies — Hiccup as ruler of Berk alongside Astrid, and the dragon as leader of his own kind. As both ascend, the darkest threat they’ve yet faced, as well as the appearance of a female Night Fury, will test the bonds of their relationship like never before.

The epic conclusion to the How To Train Your Dragon trilogy is a perfect film for family movie night! It’s got a great story, ground breaking animation and BIG laughs.

The Hidden World is not only a must-own for every fan’s 4K and steelbook collection, but it’s a perfect way to introduce newbies to the franchise.

The 4K and Steelbook collection are now available at Best Buy. You can get your copy here!

This shop has been compensated by Collective Bias, Inc. and its advertiser. All opinions are mine alone. #ManCaveMovieNight #CollectiveBias

I’m straight up a movie fanatic and if a film involves a comic character, I go into super geek out mode. One of my favorite movies from 2018 is being released on Blu-ray right in time for the holidays. I’m super pumped that I”m going to bring an anti-hero home for the holidays!

Bring an Anti-Hero Home For the Holidays

The movie that I’m referring to is “Venom”. If you haven’t seen it, here is a quick synopsis.

“In Venom, journalist Eddie Brock gains superpowers after being bound to an alien symbiote whose species plans to invade Earth.”

It’s action-packed, has some great PG-13 scares and is really, really funny. My 14-year-old daughter and I went and saw it in the theatre and absolutely LOVED it!

If you click on the image below, you’ll able to purchase your own copy. You’ll be glad that you did… Trust me! 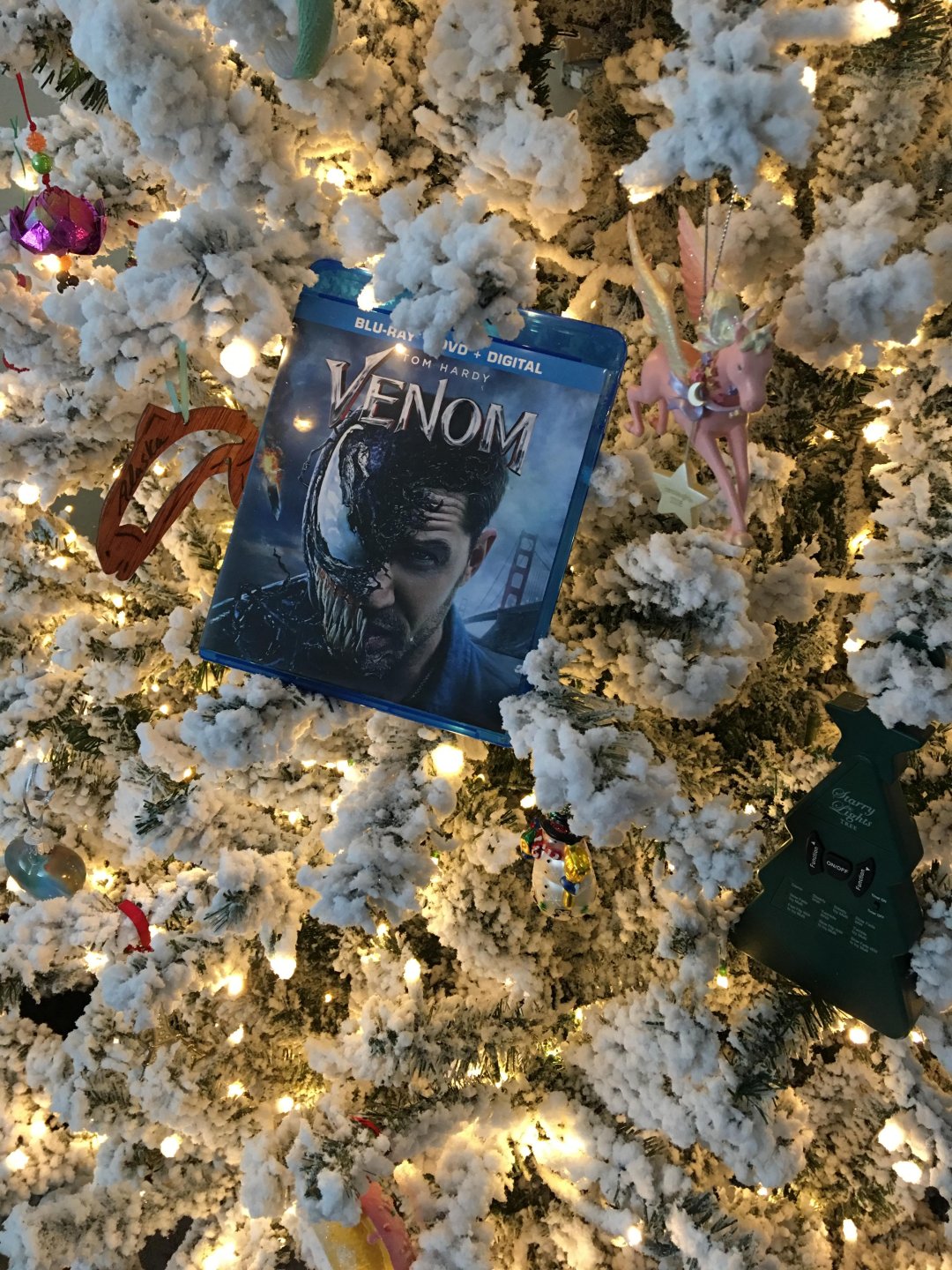 Venom is available now at Walmart. The Venom Retro Action Figure Movie Gift Set is also available at Walmart. Venom Blu-ray includes over an hour of extended content and special features. I think Tom Hardy is a great actor, so I’m definitely looking forward to the extra scenes.

I’ve already told my wife and daughter that I NEED this in my stocking this year and by stocking, I mean early, so I can watch it about 10 times before the family festivities on December 25th.

Let’s be honest, the holidays are stressful for everyone. Sitting back and watching a great anti-hero movie is time well spent and a great way to decompress during the holiday season.

If you want to double up on your holiday action movie watching, then keep an eye out for Equalizer 2 on Blu-ray. Denzel Washington reprising his most badass role ever. Now Available at Walmart on Blu-ray.

There is some language in this post. I usually try to keep things PG. This is a bit more adult and I hope you appreciate why.

I was part of the last big TV generation. There were certain nights in my household when a particular program came on… and everything stopped. We didn’t have 1000 channels and we weren’t streaming anything. We would watch reruns of Columbo, Mom and Dad liked Magnum P.I. and then there was Happy Days… a sweet, nostalgic look at the late 50’s that had a multitude of colorful characters. One episode I remember very vividly was the introduction of a alien named Mork from Ork.

Robin Williams… I Miss You

Yes, I know what you’re thinking, that makes absolutely no sense at all. You’re right! It sounds like the DUMBEST idea ever for a show – EVER! It was the guy playing Mork that literally jumped out of the television set. No one knew who “That Guy” was. We later came to know him as Robin Williams.

I was about six when I saw that episode and I still remember how much he made my family laugh. Later, my parents decided they were going to watch one of his HBO comedy specials and got the shock of a lifetime. Mork had a filthy mouth!

Williams had a command of swear words that damn near borders on poetic. My college acting coach called him, “A true vulgarian” and that was meant as a real compliment. His manic delivery, seemingly endless characters and crazy voices that crawled out of him were nothing short of genius. After seeing his visceral performances, most audience members were ready for a nap.

“The World According To Garp” was his first film and it left most people scratching their head. Why would this gifted comedian pick such a quirky and dark film to be his first starring vehicle? It was his way of letting people know, I’m more than Mork or the guy who does funny voices, I’m an artist. It was that duality of light and dark that followed Robin Williams in more way than one throughout his entire life.

It wasn’t until “Good Morning, Vietnam” that he found not only box office success, but was finally nominated for an Oscar.

A string of hits followed that most actors would trade their souls for. Bouncing between family fare such as “Jumanji” and darker,more dramatic fare such as “The Fisher King” (A classic that needs to be rediscovered by the younger generation) he showed a true gift for balancing both. In 1998 he won an Oscar for Best Supporting Actor in Gus Van Sant’s “Good Will Hunting”.

This is my favorite performance because it seems like the closest that any of us came to seeing the “Real” Robin Williams. The character was intelligent, funny, dark, sad and strong. If not strong for himself, he could be strong for other people.

There’s a scene where Matt Damon keeps verbally pushing during a therapy session and he makes the mistake of bringing up Williams’ dead wife. Robin Williams whistles and then puts his hand around Damon’s throat and informs him if he ever brings that subject up again, “I will end you!”. Up until that moment you knew there was a sadness and rage that was being masked by his quick wit. Every time I watch the movie, I wait for the whistle.

It seems like most brilliant comedians are chased by demons, whether it be abuse, insecurity, loneliness or just straight up depression. It’s too bad we have to lose such an amazing artist to something so tragic.

I never had the pleasure of meeting him, but maybe in the next life we’ll get the chance to know each other.

I’ll wait for the whistle.

Here at Rick On The Rocks, I love to take care of my readers. So, I’ve been very busy lining up some goodies over the next couple of months that I think everyone is going to love! First up… “Den of Thieves” Blu-ray/DVD Giveaway.

“Nick O’Brien is the hard-drinking leader of the Regulators, an elite unit of the Los Angeles County Sheriff’s Department. Ray Merrimen is the recently paroled leader of the Outlaws, a gang of ex-military men who use their expertise and tactical skills to evade the law. O’Brien, Merrimen and their crews soon find themselves on a direct collision course as the criminals hatch an elaborate plan for a seemingly impossible heist — the city’s Federal Reserve Bank.”

I had a great time watching this movie. It has a grungy sort of 70’s style to the way it looks and the grittiness of the story. But then you see that there is also some influences from movies like “Heat” and “The Town”. It has a great script and first time writer/director Christian Gudegast really has a grasp and understanding of the crime/thriller genre. It’s original and a movie that I wanted to watch again as soon as I was done watching it the first time.

Now for the fun part! You can enter to win your own copy of  “Den of Thieves” on Blu-ray/DVD.

“Den of Thieves” is now available on Blu-ray/DVD

I live in Southwest Florida with my beautiful blogger wife and our teen daughter. I love movies, music, comic books, food, travel and tasty beverages.

Recently from Rick on the Rocks