I’m a lover of beer and in my search of all things hoppy and awesome, I came across the show Beer Geeks on Ora.Tv. Host/Master Brewer Michael Ferguson is getting ready to take the beer experience to a whole different level.

Have you ever paired beer with…cupcakes?

They’re mixing things up this week on Beer Geeks and whether you’re a foodie, a craft beer lover (or both!), you’ll want to join them for a #BeerGeeksLIVE Twitter party on Thursday November 20th at 8pm EST in honor of the newest episode featuring the Odell Brewing Company. Yours truly is one of the panelists…. So you have to check it out!!!

The Odell Brewing Company of Fort Collins, CO is known for crafting some amazing beers. Their 5 Barrel Pale Ale has a distinctive hop character that is created by extracting essential oils from select hops. They treat 5 Barrel Pale Ale to an infusion of fresh whole hop flowers, as well as four hop additions during the kettle boil. It gives this tasty Pale Ale a fresh, lively flavor.

If you’re ever in their area, make sure you stop by and check out the tap room.

Their tap room hours are:

Brewery tours are offered every day of the week at 1, 2, 3 and 4 PM. Tours are given on a first come first served basis, within a half hour of the start time. Reservations or tickets are not necessary. They cap their tours at 25 people in order to keep them safe, enjoyable and manageable!

Enjoy this sneak peek of the upcoming episode:

Master Brewer Michael Ferguson is a pioneer in the craft beer world and among the first genuine Beer Geeks. With BJ’s Restaurants Inc since 2004, and currently BJ’s Director of Brewery Operations, Michael has been involved with some of the most influential breweries in America. As a Dan Gordon protégé he climbed to Director of Brewery Operations after a decade at IBM. If that’s not enough, he also has a B.S. in Engineering from UC Berkeley.

You can get the chance to talk with Michael Ferguson when he joins us at the twitter party!!!

Here’s the 411 on the #BeerGeeksLIVE Twitter party & everything you need to know:

Be sure to RSVP!

5-hour ENERGY® just held their first Yummification Contest. People submitted videos explaining their recipe and coming up with a name for it. I myself submitted one, Where’s My Runner Up Trophy, Dammit?!  These videos are really well done and very funny.

1st Place Winner -“Pomelimelade” by Tim Merlau from Los Angeles, CA
This winning submission mixes a Pomegranate 5-hour ENERGY® shot with limeade, and then takes us on a  hilarious musical journey through all that can be accomplished over several hours.
Pomelimelade
1 glass Limeade
1 shot of Pomegranate 5-hour ENERGY®
2nd Place Winner – “Ramalamadingdong” by Mark Golembeski from Los Angeles, CA
The second place video helps you turn that 2:30 feeling frown upside down by mixing a 5-hour ENERGY® shot with lemonade.  This video has a little bit of everything: a clown, a puppy, a guy in a tutu, and much more.
Ramalamadingdong
1 glass of lemonade
1 shot of Berry 5-hour ENERGY®
3rd Place Winner – “Arnold Power” by Zac Sheorn from Lugoff, SC
The third place winner reminds you that you don’t have to be good at sports, but when you try mixing a Pink Lemonade 5-hour ENERGY® shot with decaffeinated iced tea, it helps keep you refreshed while practicing.
Arnold Power
1 glass Decaf Iced Tea
1 shot of Pink Lemonade 5-hour ENERGY®

All the winners and recipes can be seen here.

What new 5-hour ENERGY® recipes do you want to try?

I’ve noticed it and I know you have too, everywhere I look, everything is pumpkin flavored. It’s the new “Go To” for fall holiday flavors. Candles, breads, ice cream, soap. gum, it’s everywhere! But, one the best things flavored with pumpkin or pumpkin essence or pumpkin fairy dust (Whatever the hell it is they use!) is BEER. They’ve always been there, but in the last 5 years, the pumpkin beer business has exploded. Every brewery has at least one, if not more, pumpkin beer on the market. Now, keep in mind many beers are only available regionally, which is a real bummer. The ones I’ve chosen are carried at Total Wine or can be ordered through them.

I know for a fact that there are so many great pumpkin ales out there that I haven’t tried, so it’s hard to do a Top 5. But these are the ones that I dig on. I hope everyone has a great fall and drink responsibly.

What are your favorite pumpkin beers?

This week, Norwegian Cruise Line introduced something new – destination cocktails. The ever growing mixology trend has taken to the high seas and Norwegian has gotten in the game in a BIG way. Most of my readers know I had the privilege of sailing on the  Norwegian Getaway. They had some amazing cocktails on that ship, but now, they’re taking it up a notch.

In line with the classic cocktail culture resurgence seen in today’s land-based bars and restaurants, the on board regional menus each feature four specialty cocktails created with traditional spirits and flavors relevant to the ships’ itineraries.

Recognized for their ingenious approach to the industry, the avant-garde cocktail programs created by Bar Lab have been awarded numerous professional honors and featured in publications worldwide. The summer menus designed by Bar Lab along with the Norwegian beverage development team feature avant-garde cocktails made with fresh juices, aromatic herbs and complementary local spirits. The new cocktails offer guests an advanced taste of the ship’s ports of call and further immerse them in the local culture.

When sailing to Bermuda on Norwegian Breakaway or Norwegian Dawn, guests can enjoy a traditional Dark & Stormy, with Bermuda’s own Gosling’s Rum and ginger beer, or sample a new take on a Mai Tai, featuring house-made almond syrup, Gosling’s Rum and dusted with powdered cinnamon. Cruisers in the Caribbean sailing onboard Norwegian Getaway or Norwegian Sky can try a Spicy Pina Punch, with Bacardi Superior Rum and chipotle pineapple syrup, or a unique Island Colada, featuring coconut cream, peach puree and Bacardi Dark rum.

Distinct beverages on the Europe menu, which is served on Norwegian Epic, Norwegian Jade, Norwegian Spirit and Norwegian Star, highlight Aperol, Campari, Hennessey and Grand Marnier, while on Pride of America Hawaii cocktails include Whaler’s Dark rum and even Kona beer.  Those guests experiencing an Alaskan cruise on Norwegian Pearl, Norwegian Jewel or Norwegian Sun can warm up after exploring a glacier with a Smoky Hot Toddy, combining crème de cacoa, orange peel, cloves, bitters and Grant’s scotch or a Northwest Java Jump with Patron XO Café, Chai tea and cream.

These drinks sound fantastic. I’m looking forward to trying the Spicy Pina Punch and the Smoky Hot Toddy (Spicy and Smoky… Two words my wife uses to describe me!!).

Which on of these drinks sound great to you? 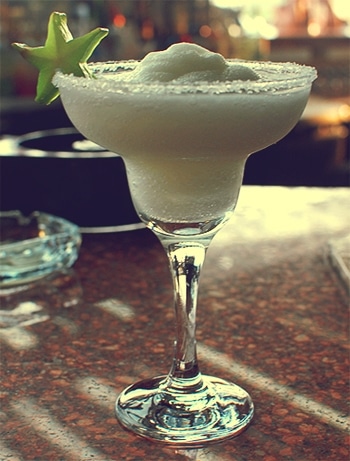 It’s official, February 22 is  National Margarita Day! I don’t know when this happened. I’ve checked my e-mail, I’ve checked my voice mail… I was never invited to the meeting. I’m a little hurt, but I’ll get through it. I started doing a little research about the popular adult beverage and this is what I came up with.

A margarita traditionally is tequila, triple sec (Cointreau), and lime juice. Served in a glass with a salted rim and a lime slice. You can have your margarita on the rocks, frozen or as a martini. In recent years, thousands of different spins and flavors have been introduced to the “traditional” margarita. But the authentic recipe is this:

Throw some salt on the rim with a lime wedge and this is what is known as a Perfect Margarita.

There are a few different accounts of how this drink came to be. In 1938, at the Rancho La Gloria Hotel, which was right outside Tijuana, Mexico. Bartender Carlos “Danny” Herrara is believed by some to be the creator of the margarita. Other accounts have a bartender named Don Carlos Orozco creating the drink at Hussong’s Cantina in 1941. Still others believe that Margarita Sames, a Dallas socialite, was at a Christmas party in Acapulco, Mexico in 1948 and created the drink that bears her name. Some drunk socialite from Dallas gets “bombed” in Acapulco and claims she came up with the drink… right. I once heard a drunk sorority girl say she invented the Jack and Coke, somehow, I’m not buying this story AT ALL.

Like any popular drink, these are only a few of hundreds of accounts. In my opinion it does not matter who came up with it, I just want to drink one. Everybody have a great Margarita Day! I encourage you to come up with your own version of the drink and let me know how it turned out. If it’s good, I’ll put the recipe up and share it with all the R.O.T.R. readers to enjoy.

I live in Southwest Florida with my beautiful blogger wife and our teen daughter. I love movies, music, comic books, food, travel and tasty beverages.

Recently from Rick on the Rocks